How to Root your Nook Tablet 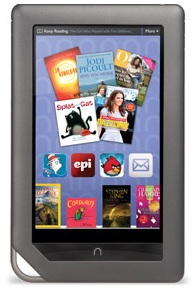 Four days after its release a root has been provided for the Nook Tablet to turn it into a full Android tablet. The Nook Tablet was released November 16, earlier than originally expected, and probably due to Amazon’s Kindle Fire release date.

Here’s the 6.9Mb download file that comes with the instructions at XDA Developers.

You start by enabling USB debugging, downloading an Android APK. Then it’s just a few clicks to root the Nook, using the NookandZergy.zip download (above). Once rooted you can follow on by installing the Android Market using the same method as is used for the Kindle Fire.

, plus a Micro-SD card slot. You can review the full spec’s at our Nook Tablet page. At $249 it is more expensive than the $199 Kindle Fire but the extra capabilities make up for that, and now that it is rooted it makes for a nice 7 inch Android tablet.

Or, you can now purchase the NOOK Color eBook

for $207.99 from Amazon which can be fully rooted using Auto Nooter and an SD card.

I don’t have a Nook Tablet or Nook Color and have not tried these roots myself. If you have any questions you should direct them to the forums in the links.